A Season of Dreams Come True 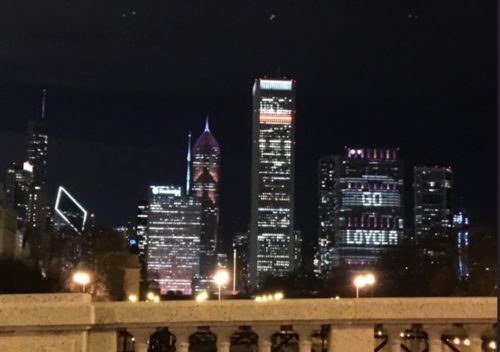 This is the column I’ve been dreading having to write since a day or two before Loyola’s first NCAA Tournament game, nearly three weeks ago. Yes, of course I enjoyed every game, and most of the time between the games in Loyola’s amazing 2018 NCAA Tournament run. But I knew there was something like a 99-point-something chance the Ramblers would lose at some point in the 2018 NCAA tournament. And that it would be the end of a dream-come-true season for me, the most enjoyable season by far in my nearly 30 years of following Loyola hoops. And I would have to write about it.

The dreaded task of writing the obituary of the season; it would mean saying farewell to some great players, with endearing personalities I’ve come to know and admire. It would mean acknowledging the end of a season of wonder that smashed so many stubborn negative streaks and stereotypes that have held Loyola basketball back. Now I would have to instead wonder if Loyola could build on success, and how to help bring the conference up as well. And having it end suddenly, with an ignominious loss to an over-seeded Power Five program in the first or second round was going to be hard.

But time after time, the Ramblers pulled out inspiring victories against teams few thought they could beat, putting off the inevitable task until Loyola was in the Final Four. THE FINAL FOUR!

Put it in perspective… Loyola was picked to finish third in the MVC, a conference that almost everyone agreed would likely be a one-bid league after Wichita State’s exit. And even that seemed like a stretch for a lot of observers; this was a team that had never finished above .500 in the MVC, hadn’t had a winning conference season since 2007, and was 64 games under .500 in conference play over the past 10 years. Coach Porter Moser hadn’t had a winning season in conference as a head coach since guiding Arkansas-Little Rock to an 8-6 mark in 2003.

Even after the season got rolling and the Ramblers beat #5 Florida on the road, there were still question marks and setbacks. A blowout loss at Boise State was ugly and sobering. Custer and Richardson were lost to injury for a combined 15 games. A loss at Milwaukee and a home loss to Indiana State all but assured Loyola would have to win the MVC Tournament to get to the Big Dance.

On the morning of January 4, 2018, Loyola was 11-4 overall, and 1-2 in conference—with the next two games on the road against the two most recently successful programs in the MVC. Yes, there was the win at Florida, but the Gators had dropped out of the AP Top 25 by New Year’s Day. And Loyola’s second-best win at that point was a home W over Wright State.

The next game against UNI was the return of Clayton Custer from his ankle injury suffered against Florida. And from there, Loyola won 14 of their next 15 games to finish the regular season at 15-3. It was their first regular season conference championship since 1987. After beating UNI, Bradley, and Illinois State to win Arch Madness, the Ramblers won their first conference tournament title and secured their first NCAA Tournament bid since 1985.

And the “first since” and other milestones just kept coming: first Loyola tournament win since 1985, longest Loyola winning streak since 1985, first Sweet 16 by a team from Illinois since 2006, longest active winning streak in college basketball, first Elite Eight appearance for Loyola since 1963, first Elite Eight appearance by a team from Illinois since 2005, etc.

One other “first since” was Loyola’s first appearance on the national stage since the social media age began. And the stories and videos and memes of Sister Jean, Custer and Richardson’s friendship, the Wall of Culture, and Chicago latching on to the Ramblers as a feel-good story was made to blow up social media. Sometimes inspiring eye-rolls, and sometimes inspiring tears, Loyola also had a Final Four level Twitter, Facebook, Instagram, YouTube, Soundcloud and media game.

I knew there had to be a season-ending piece, but I had no idea it would take so long. Loyola blew past my main goal for the season, an NCAA Tournament appearance, with Donte Ingram’s beautiful three-point shot splashing at the buzzer against Miami. At that point I was more than satisfied. Then came Custer’s miracle, off-balance, running 20-foot jumper against #3 seed Tennessee that hit rim, bounced high off glass, and through. Then the Townes three against #7 Nevada. And a relative blowout against K-State. But that time, I was hoping against hope that I’d never have to write that column that ended with a loss.

Success always plays with your mind. And as Loyola had a 10-point lead midway in the second half against Michigan, it played hard. “Are we going to win this? I think we can win this! We’re going to win this! We are going to the National Championship Final!” It played so hard that the shift in the pace of the game being dictated by Michigan, and the slowly tightening noose of the Michigan defense were barely noticeable. Until the lead was down to 3. Then nothing. Then negative three. And negative six. Finally, 57-69.

I felt bad for the Loyola players who were taking it so hard, in large part because I wasn’t taking it so hard. I felt bad for the students on TV who went down to San Antonio and looked crushed when Loyola lost. I knew that the day would come to write the column that marked the end. But the players didn’t have any concept of an end to the season until it finally arrived, sudden and severe. That sincere #NoFinishLine belief by both players and fans was probably a big part of why they were in San Antonio on the last weekend of the college basketball season.

I remember watching Donte Ingram and Ben Richardson play in their first game as Ramblers, November 11, 2014. That was the year Loyola went to their first post-season tournament in 30 years, when Loyola won the CBI in Richardson and Ingram’s freshman year, part of Loyola’s first recruiting class as members of the MVC. Both of them took steps forward year by year, adding or improving a new facet to their game each off season. And they became steeped in the emerging Loyola culture, helping to integrate players like Lucas Williamson, Aundre Jackson, and Clayton Custer into the philosophy behind Loyola basketball.

As their college basketball careers end in the 2018 Final Four in San Antonio, Richardson and Ingram have been a part of 89 wins against 50 losses in their Loyola careers—the most wins for four-year players since—- EVER, for Loyola. Donte Ingram finishes his career with 1235 points, 688 rebounds, and 175 three-pointers. Ben Richardson ends with 761 points, 306 assists, and 302 rebounds. Both won prestigious league awards—Donte Ingram with the 2018 Second Team recognition and 2018 Arch Madness Most Outstanding Player, and Ben Richardson with the 2018 MVC Defensive Player of the Year award. Donte and Ben—and fellow seniors Aundre Jackson, Nick DiNardi and Carson Shanks– leave Loyola and their fans with banners, trophies, and memories. And most important, they’ve established a new sense of pride, and a culture of success in the program.

Thank you to everyone in the Loyola community—players, coaches, administrators, trainers, sports information, fans, students, and friends—who helped make this fantastic season happen.